How do you get a 24’x8’x6’ PoolPak SWHP190SR dehumidification unit through a 6’ wide door?

Hugh Flack was brought on as Facility Director at the school in 2017 and when he found that the existing PoolPak unit was due for replacement he contacted TEC. Jay DeStefano, Territory Manager and John Peloza, Product Manager met with the school and its Engineer, Wold Architects & Engineers, to help with the project. TEC was able to replicate the original unit with improvements such as variable frequency drives and premium efficiency fan motors. Wold also improved air distribution and quality with new duct work.

A problem arose when they were trying to figure out how they were going to get this huge piece of equipment through a 6′ wide door. The answer was piece by piece using PoolPak’s Build on Site program. PoolPak is unique with this offering. The unit was built at the factory and packed onto skids. A factory crew of four builders was sent to the job site to assemble the unit in four days. This crew was followed up by a factory startup technician and a TEC factory trained technician. The project timeline was tight, as most school summer projects tend to be. The general contractor, Irving Construction Company and the mechanical contractor C. Acitelli Heating & Piping Contractors worked together to get the pool back in operation on time.

TEC is the representative for PoolPak in Northern Illinois and Northwest Indiana. Please contact your Territory Manager for more information. 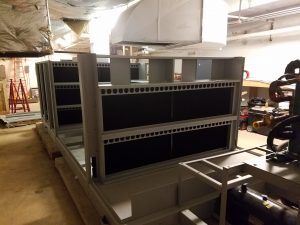 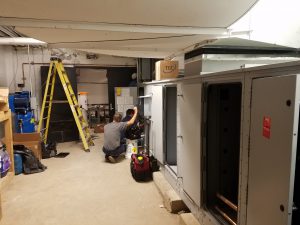